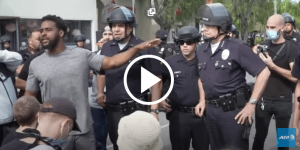 Racial justice activists cheer on Los Angeles Police Department Chief Michel Moore as they protest the death of George Floyd, an African-American man who died during an arrest by police in Minneapolis. Moore has said in a statement on Twitter that the actions of a Minneapolis police officer kneeling on Floyd’s throat in a video that captured the incident “were incredibly disturbing and go against the basic law enforcement principle of preservation of life.”

Los Angeles mayor Eric Garcetti says his city will "never be completely open" until there is a cure for the coronavirus. A lockdown not based upon science, will go through till August.

The 81-year-old Bodybuilder Who Inspires Others To Get Fit

Deputies Claim They Killed a Black Man in His Home When He Tried to Grab a Gun. His Family Says Otherwise

A Los Angeles man was fatally shot in his home by deputies Thursday morning in a tragic domestic dispute call gone wrong. His family, however, insists the tragic incident could have been avoided if authorities didn’t prematurely pull the trigger.

Michael “Blue” Thomas, 62, was killed in his living room in the early hours on Thursday after Los Angeles County Sheriff’s Department deputies responded to a domestic dispute call, a spokesperson told The Daily Beast. But while authorities claim Thomas was shot after reaching for one of the deputy’s guns, his fiancée and attorney insist the opposite—that he was turning away.

“They broke the front down and they grabbed Mr. Thomas immediately,” Bradley Gage, the family’s attorney, told The Daily Beast on Friday. “As they were holding him, they hurt him by twisting his arm. At that point, because he was uncomfortable, Mr. Thomas tried to move and one deputy just stepped back and shot him.”

“He was murdered without justification,” he added. “It was 100 percent avoidable.”

According to the Sheriff’s Department, deputies responded to a “domestic violence in progress call” in Lancaster at around 5:30 a.m. The 911 call was made by Thomas’s fiancée, Kimberly. She later told deputies she “was assaulted by the suspect,” according to a statement from authorities.

“During the call to 911, she never speaks to the operator but rather the phone line is left open,” the statement said. “For several minutes arguing and fighting between the caller and the suspect can be heard in the background.”

Once deputies arrived, authorities said they tried to detain Thomas, but he “refused to comply with the deputy’s orders and an altercation” ensued.

“During the altercation, the suspect reached down and attempted to gain control of one of the deputy’s firearms. It was at that time when a deputy-involved shooting occurred,” the statement said.

However, Gage said that Thomas did not own a weapon and was only having a verbal argument with his fiancée when police arrived—which police could have observed “from a window outside instead of barging in.” He said that Kimberly did not go into detail with him about why she initially called the police—but he noted that the pair had lived together for 21 years and often communicated loudly because she is “mostly deaf.”

“The claim that he reached for a gun is completely false,” Gage added, noting that the incident “completely defies the fourth amendment.” “He was disabled, he had problems with his hands. It would have been painful for him to try to grab a gun.”

In an interview with CBS Los Angeles, which first reported the shooting, Kimberly also said that Thomas never tried to grab one of the deputies’ guns. “I heard Michael say, ‘I have a right to not let you in the house,’” she said.